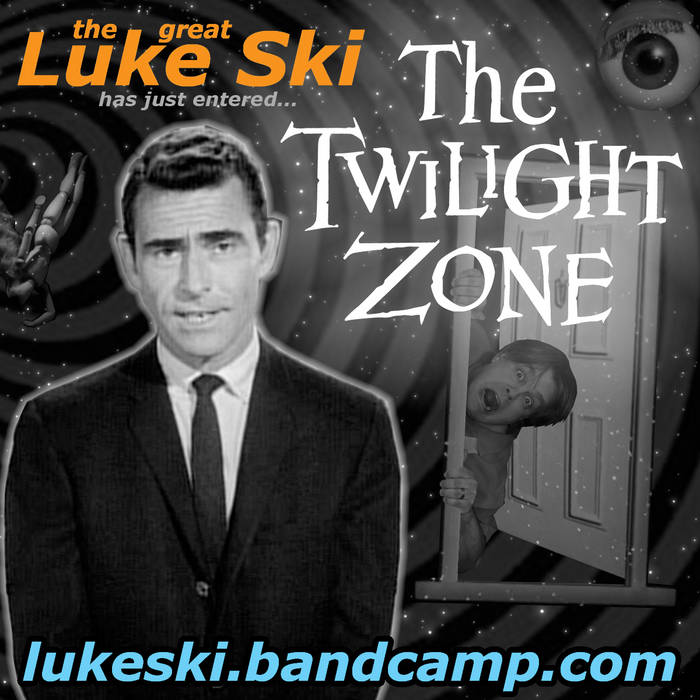 Submitted for your approval... A song parody idea so obvious that no one even bothered to getting around to recording it and releasing it to the general public. Enter "the great Luke Ski", a man for whom the concept of 'too on-the-nose' is completely alien. Having waited 17 years to write a parody of Snoop Dogg about Snoopy, he comes to the conclusion that 33 years was long enough to wait for anybody else to finally record and release a version of the 80's classic new wave track "Twilight Zone" by Golden Earring changing the lyrics so the song is finally actually about the 1959 classic TV series "The Twilight Zone". In doing so, he has turned himself into the feared 'thing that goes FuMP in the night', writing descriptions with puns that not only test the Outer Limits of your patience, but will also tarnish his Serling silver reputation. You're traveling through another dementia, that's the song posted up ahead, your next stop... well... you know.

If you're interested in hearing any of Luke Ski's other nerdy comedy songs, visit his Artist page at the Funny Music Project www.thefump.com/thegreatlukeski , or his official website: www.thegreatlukeski.com

[*Opening notes of the theme to “The Twilight Zone” *]

It's 2 p.m. after an H-bomb war.
I'm sittin' in the rubble of the library floor.
All the books I can read, [*glasses break*] but I just broke my glasses.

Yeah, there's mannequins come to life, minds that you can read,
tiny space invaders, monsters on Maple Street.
Will I ever escape? The penny fortune teller don't like my chances.

Help, I've stepped into “The Twilight Zone”!
Through the scary door that leads to the unknown.
It's best if you keep thinking happy thoughts,
or you might get turned into a jack-in-the-box.
Young Anthony told Dan, “You're a very bad man!”

[Anthony Fremont: You're a bad man! You're a very bad man!]

Birthday didn't go as planned. “You're a very bad man!”

At Treasures Unlimited, you can buy eerie things.
A ventriloquist dummy that can move without strings,
and a slot machine. I'm pretty sure I heard it call me.

This old camera shows the future to help you commit crime,
A stopwatch that freezes time,
and for your daughter, get this pretty wind-up talking dolly.

[Talky Tina: My name's Talky Tina, and I'm going to kill you!]

Help, I've stepped into “The Twilight Zone”!
There's a dead grandma on my toy telephone.
A blonde bombshell shunned by some pig-nosed freaks,
so she would fit in at a convention for geeks.
Now I don't mean to complain, but there's a man on the wing of the plane!

I know you think I'm insane, but there's a man on the wing of the plane!

[John Valentine: There's a man on the wing of this plane!]

Shoot him through the window pane.

Rod Serling (spoken over bridge):
Listen close so you all don't miss, as we go a little something like this. While his peers fill their meaningful lives with high-paying jobs, starting families, and developing entertainment in Tinseltown, a man named Luke Ski has instead devoted the past 20 years to the pursuit of one goal: To create comedy songs that will top the charts of “The Dr. Demento Show”. While he may seem like a friendly neighborhood 'Peter Parker', he is in reality 'Stealing Like A Hobbit', frequently co-opting pop-hit melodies for song parodies. But much like 'Snoopy The Dogg', he believes his delusions of greatness are real. A mind packed with 'Too Much Stuff', he floats down a stream of consciousness, with thoughts of Disney World pirates and Jedi knights. But 'When You Wish Upon A Death Star', you'll often find out that 'You Don't Know Jack'. Soon this deconstructor of pop-culture will deconstruct himself into a meta-oblivion. So despite being a genuine kid-at-heart, this 'Fake Adult', finds himself rocking the mic... …in “The Twilight Zone”.

I'll never get back home, when the rerun hits are shown.

[Sally Solomon: So how was your trip, sir?
Big Giant Head: Horrifying, at first. I looked out the window and...
I saw something on the wing of the plane.
Dr. Dick Solomon: The same thing happened to me!]