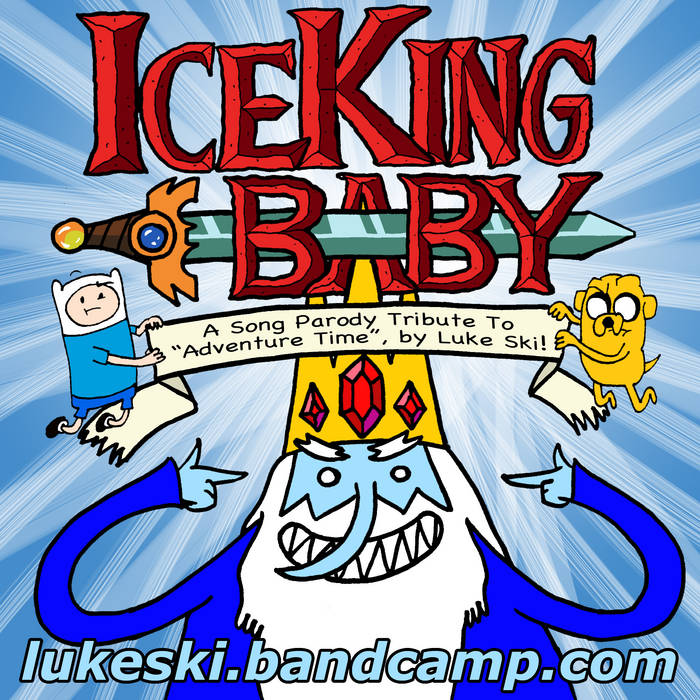 (1st verse)
All right stop. - Refrigerate and listen.
Ice King’s back on my usual mission
Still young - in my late thousand-eighties,
Fly through the kingdom, scooping up ladies.
[Finn & Jake: Will you ever stop?] Sure, when I’m wed
to a princess! (heh heh) Or, I’m dead.
Don’t count on that, ‘cuz when you battle this wizard,
I’ll wave my hands, and then kablam, there’s a blizzard!
Dance! - At my party for penguins,
all busting moves, they’re my finely-dressed minions.
Studly! - I work out so that I can be
in the best shape for my future bride-to-be.
Tell me ‘let it go’, and I’ll laugh and say
that the cold never bothered me anyway.
If you are a princess, I’ll kidnap you,
then pass the mic, so that you can rap too!

(2nd verse)
Now that I’ve shown I’m a fresh stud,
Introduce Finn and Jake, they’re my total best buds!
Finn’s on the point doing beat-box, and Jake’s [Finn: *beat-boxing*]
in the kitchen [Jake: MAKIN’ BACON PANCAKES!] [Finn: *beat-boxing*]
Yummy yum! - Just a dash of cumin!
Rumor says Finn’s the world’s last human.
Has an ear-hat, - and a sword collection.
And Jake the Dog? Just watch him go stretchin’
Shapeshift! - You’ll see Jake prevail
at mountain size, or as small as a snail.
Sometimes we disagree, every day or three,
[Finn & Jake: Do we fight?] Yes, and you beat me
usually. - I ain’t afraid of fighting.
My beard will fly, then I’ll throw some ice lightning.
But Finn’s a hero - I’m who he’s pityin’
He’s got a - [Finn & Jake: ENCHIRIDION!]
They got glory, treasure, gold coins.
All I get is a kick in the boing-loings.
Jealous! - ‘Cuz while I’m just a bum,
Finn and Jake hang with Princess Bubblegum.
Candy - is your royal host.
The citizens are sweet ‘cuz they’re made of dextrose.
Gumballs - keep watch on the town,
but they’re no match for my magic crown!
Frozen! - Nab P.B. in her jam-jams.
Finn shows up, - punches me in the hams.
“Homies help homies, always” they say.
But they just foil my plans, then I sneak away.
No one comprehends when I make amends.
They leave me out, so I’ll make up my own friends.
I’ll write a fanfic and gender-swap it.
Slap it on a shirt to sell at Hot Topic!

(3rd verse)
Take heed - ‘cuz here comes Marceline.
The Land Of Ooo’s own Vampire Queen.
Sweet axe! - Just beware of her grapples.
She’ll eat the red off of Tree Trunk’s apples.
And Lemongrab always acts ill.
[Lemongrab: This is UNACCEPTABLEEEEE!!!]
Lumpy Space Princess said [LSP: I wanna date you!]
I said ‘no thanks’, - and then she told me to
[LSP: Lump off!] - Flame Princess was fun.
Conquered her father with Cinnamon Bun.
So hot, - other heroes say “Glob!”
If snowbeast touched her, it would melt into a blob.
BMO’s rockin on the two turntables,
Magic Man tells Lady Rainicorn some Graybles.
You might think this track sounds all archaic,
We think the tune is quite [Ice King & Finn: ALGEBRAIC!]

Yo buds, let’s get out of here. Word to your Gunthar.

Luke Ski as the Ice King, Jake The Dog, and most everyone else
Jace McClain as Finn the Human
Tia Ballard as Fionna