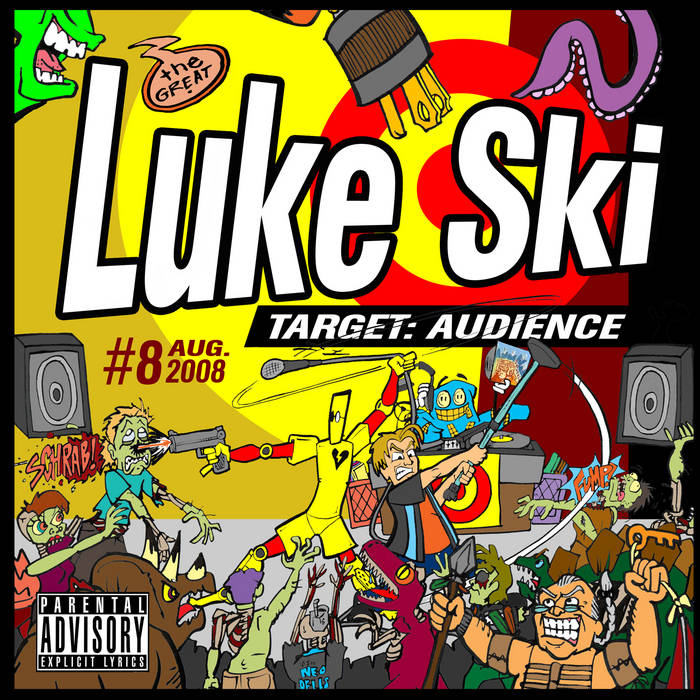 So who would win in a fight, Keifer Sutherland, or a funky surrealist robot assassin from the future? Tough call. Guess you'll have to set your sights on the great Luke Ski's 8th full length album "TARGET: AUDIENCE"! And yes, on some of these tracks, Luke does have an audience, recently recorded at his first spoken word show, spinning some funny anecdotes of life on the con scene, on the internet, and at the caricature stand [some of which contain explicit words or adult themes]. Besides "Jack Bauer" vs. "Scud" the Disposable Assassin, you can get your comedy music meta geek on with tracks like "Everybody Get Weird (an Art Paul Schlosser Remix)", "FuMP-In!", and Luke Ski's cover of "The Chainsaw Juggler" featuring cameos by 18 DEMENTIA ACTS! Carrie Dahbly returns on many tracks, and lest we forget the likes of Project Sisyphus, Spaff, Power Salad, Possible Oscar, and Rob Balder as the ultimate World of Warcraft n00b! Not nerdy enough? Let's throw in some song parody tributes to "Heroes", "Babylon 5" and "Battlestar Galactica!" Well what the frak are you waiting for? Order "TARGET: AUDIENCE" today!