When You Wish Upon A Death Star 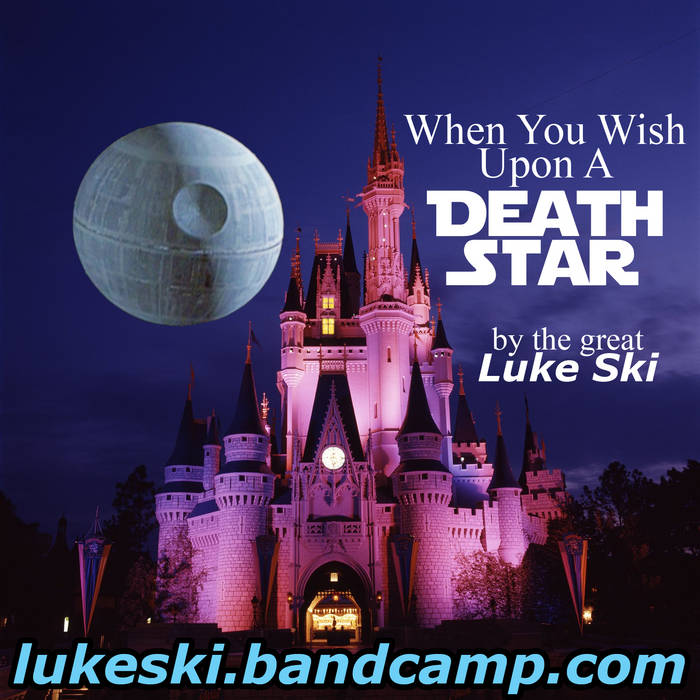 In 2009 when it was announced that Disney bought Marvel, I quickly posted a song about it at the FuMP .com called "Marvel Poppins", which the fans really seemed to enjoy.

Three weeks ago when it was announced that Disney bought Lucasfilm, known primarily for the "Star Wars" franchise, within hours I was inundated with emails, texts, tweets, and Facebook messages from people demanding that I do a follow up song on this topic, including an email inquiry from Dr. Demento himself. And with that I said, "Hi ho, hi ho, it's off to work I go."

So, with the Star Wars franchise's history of making alterations to their films and re-releasing them into theaters, I present to you now a sneak preview of what to expect the next time you go to the cinema to see the saga again under it's new mouse-ear-hat-wearing, pixie-dust-laiden management. You're welcome.

Jiminy Cricket:
When you wish upon a Death Star,
Makes no diff- AAAHH!!!

Lead Jawa: Welcome to our traveling desert dump,
Owen Lars and Beru.
Buy this protocol droid and this astromech,
and we'll throw in Wall-E too!
All together!

Scum: This is Tattooine, wretched hive of villany,
Better shoot first, or it'll be your last!
In our bar, everybody's mean!
On this planet Tattooine.
Watto: I am the guy betting on a pod race,
Now I got Hutt debt collectors in my face.
Ponda: I am the guy, wants to cause Luke harm.
Face like a walrus, and a newly severed arm.

Homer & Jethro:
Lives on a mountaintop on Tattooine.
In his youth, he once rescued a queen.
Trained Anakin when he was just a teen,
but couldn't stop him from becoming a machine.
Obi-Wan Kenobi
stinked up the vile frontier.

Princess Leia:
Told Tarkin lies, he called my bluff.
Alderaan is where I kept my stuff.
Now it's debris.
Can't believe he, blew up my world.

Princess Leia:
Dewbacks on the Dune Seas
weren't here in the 70's.
This Special Edition has things I don't know.

---[To the tune of “Grim Grinning Ghosts” from the Haunted Mansion]---

Boba Fett:
Mister Lord Vader sir, who will my bounty be?
Let me take your order, hunt them down.
You ain't never had a Fett like me! Oh, ho ho!

Admiral Ackbar:
It's a trap! It's a trap!
We fell right into their lap!
The Empire saw us coming.
Soon our ship will just be scrap.
Sheilds down? Watch us soar!
Lando, fly into that core.
Those brave Ewoks sure aren't yellow.
Maybe they got help from Willow.

(Darth Vader voice effect on all of Vader's lines/vocals.)
(spoken:)
Vader: Luke, I am your father, and so we are all connected, in the circle of life.

(spoken:)
Emperor: You've got a long way to go, my young apprentice.

Emperor: Remember Ahsoka Tano, your padawan you called 'snips'?
Vader: (spoken:) Yeah?
Emperor: Now realize she got murdered, heh heh heh, by my Order 66!
Vader: (spoken:) What?!
Emperor: You two were quite close, and that makes you sad.
But don't feel that, instead get real mad!
Embrace your hatred, and see what happens,
Get dark side power to choke your captains,
Like your dead wife from Naboo...
Vader: (spoken:) Qui-Gon, man, solid Qui-Gon!
Emperor: The Bare Neces-SITH-ties of life will come to-

---(music flops to a stop because the Emperor is suddenly interrupted by Jar Jar.)---

(spoken:)
Jar Jar: (to the tune of “It's A Small World”) Meesa Jar Jar after all!
Emperor: AAOOWW! You threw off my groove!
Vader: I'm sorry, but you've thrown off the Emperor's groove.
(SFX: Hatch opens, Vader grunts, throwing Jar Jar out. Jar Jar yells as he falls.)
Jar Jar: Meesa sorryyyyyy!
Vader: You were saying?

Men: No... one... blasts them like Han.
Smuggles past them like Han.
Greedo: No one slices a Taun-Taun in Aspen like Han.
Girls: He'll evade every loan shark and bookie.
Han: For your causes, I really don't care.
Greedo: You can see his co-pilot's a Wookiee. (SFX: Wookiee growl)
Han: That's right, 'cause every last inch of him's covered with hair!
Girls: No one pleases like Han.
Men: Carbon freezes like Han.
Greedo: Becomes decorative sculptural friezes like Han.
Han: And I killed Boba Fett without even trying!
All: Who do we want? It's Han-

Yoda: Oh, the king of the lightsabre swingers I am,
The Jedi V.I.P.
'Till we got attacked, the Empire struck back,
And that's why I live in a tree.
Luke: I wanna be a Jedi Master,
And get my ship out of that ditch.
Yoda: Well, do or do not, there is no try,
And stop being such a whiny apprentice. Hoo hoo hoo...

Luke: Oh, well, no duh! Back-up: Well, no duh!
I wanna be like Yo-o-da Yo-de-doe-de-doe-da!
A Jedi knight like Yoda, da!
fight like Yoda, da!
So-o much. Really really!
Yoda: You know a Je-e-di A jedi!
Craves not these thi-i-ings No, they don't crave these things!
So scat you will with
Kenobi while he si-i-ings!

(Ghostly reverb on all of Obi-Wan's vocals:)

Vader: Cad Bane, Zuckuss, Zam Wessel, and Windu, and Porkins, and Nien Nunb, and Droopy McCool, and, and, wait, who are you?
Mickey: Ha-ha! I'm YOUR father now!
Vader: Nooooooooooooooooo!!!!!!!!