Because Of Bob: Luke Ski's Kickstarter FAWM album (songs I wrote about people for money) 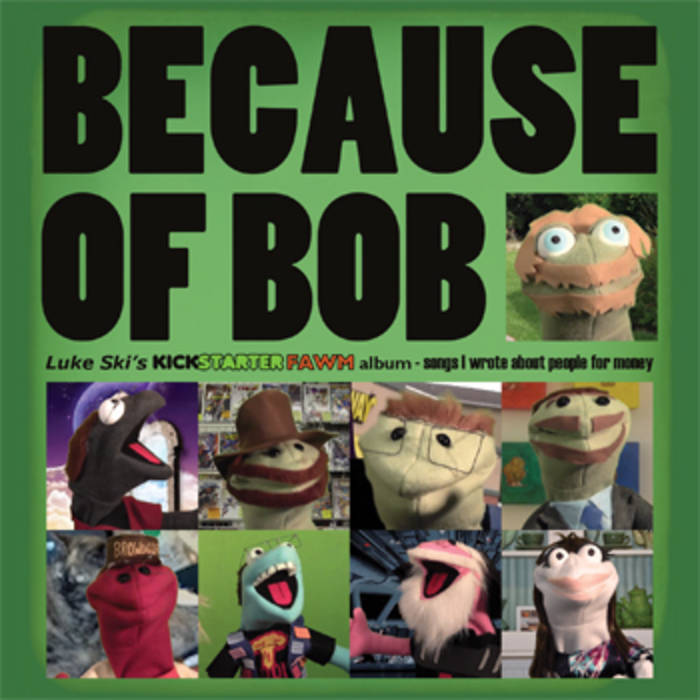 In 2012, I did a Kickstarter campaign to raise funds so I could acquire new tech that would aid me in making and performing new creative endeavors in art, comedy, and music. One of the donation prizes was that I would write and record a funny song inspired by the donor, and release all of these songs on an album. I participated in FAWM (February Album Writing Month) in 2014 as a means to write and record the 9 remaining songs I owe to those donors and release the album. The 10th song is a 2013 live version of the 2012 song I made for and with donor, friend, and frequent collaborator in comedy music, Carrie Dahlby. So while you likely won't understand much on this album, you'll certainly sense the fun and the appreciation I feel for these and all the folks who donated to my first Kickstarter. Thank you to all of you. Especially Bob. ~ Luke Ski, 2/25/2014

All the songs were written by me, and composed by me using Garageband on my MacBook except tracks 3 (Warren Zevon) and 10 (Kyle Carrozza, Ian Bonds). Final mixes & musical assistance by "TV's Kyle" Carrozza.