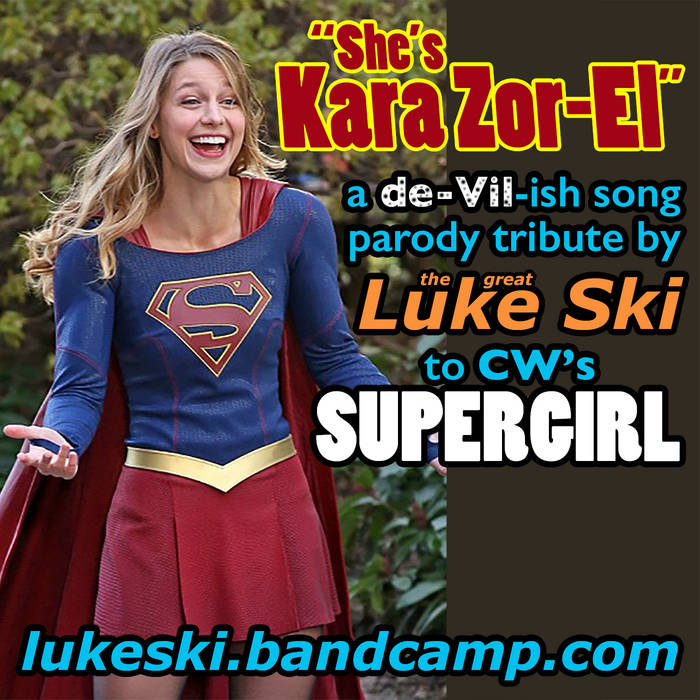 Another song from the DC superhero CW 'Arrowverse' TV shows, here's a tribute to the woman of steel, "SUPERGIRL", one of the best positive role models on television today. Ironically, the song is a parody of a tune about one of Disney's greatest villains, "Cruella de Vil", specifically meant to sound like the cover version done by the Replacements.

Her X-Raying look, the ice in her breath.
Ignorant crim'nals are scared half to death.
All of National City thinks she's swell.
She's Kara, she's Kara Zor-el.

At first you see she's at CatCo, Guy 2 & doubled: She's at CatCo!
Meek and quiet like a little mouse.
But facin' some bad guys, shoots lasers from her eyes,
And throws Metallo through a local house: Supergirl: Oops! My bad!

Not grumpy like Arrow, and faster than Flash.
She'll team up with Legends, and have a big bash!
The multiverse's crisises will quell,
With Kara, With Kara Zor-El. Yeeeaaahhh! Ho!

Went flip mode on Mxyzptlk! Guy 2 & doubled: kltpzyxM!
Guy 2: And grounded LiveWire with a shock.
Down at the D.E.O., black and blue was Indigo,
Beat Music Meister with a 2-step bop! Supergirl: Step, ball-change, kick!

Compassion and heart, strength of Hercules.
She's my own personal Kryptonite, 'cuz she's got me weak in the knees!
The definition of a blonde bombshell,
That's Kara, that's Kara Zor-El.