from BACONspiracy! by the great Luke Ski 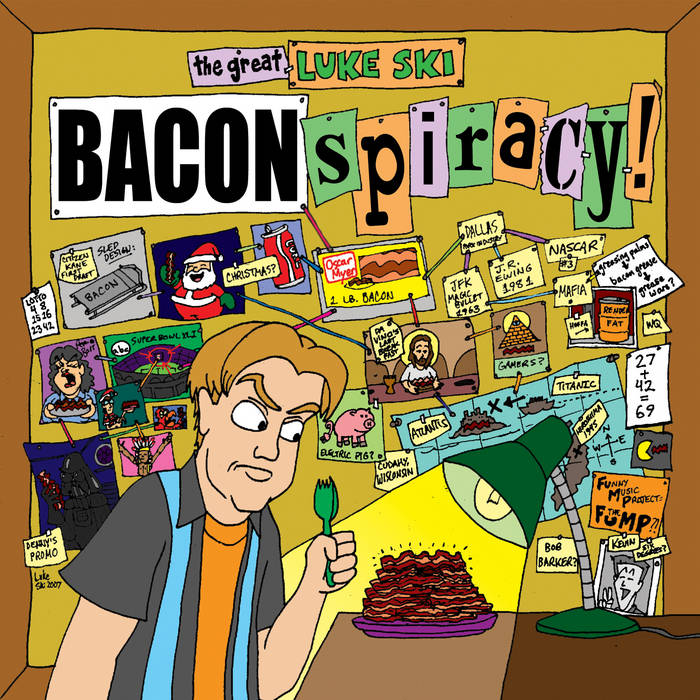 An original rock/metal shanty about the “Pirates of the Caribbean” movie franchise.

You Don’t Know Jack
An original rock/metal shanty about the “Pirates of the Caribbean”
Lyrics by the great Luke Ski, music by Jared Ringold & John Mapes
© 2006 Luke Sienkowski


Intro… (12 measures, spoken slowly with minimal to no instrumentation besides cymbal rolls, perhaps follow my scratch vocal as a guide for recording instruments on this part)
Jack Nicholson’s an actor, and Jack Black, he rocks for laughs.
Jack Skellington’s the pumpkin king with jolly epitaphs.
Bruce Campbell played Jack Stiles, who was the “Jack Of All Trades”.
And Jackie Chan did his own stunts while juggling live grenades.
(*SFX: explosion*) (P&R laughing)
All of these Jacks beloved, they all go the straight and narrow,
But none of these Jacks holds a candle to Captain… Jack… Sparrow!

Verse 1 (16 measures)
The Pirates of the Caribbean sailed the ocean blue,
Led by Captain Barbosa and his own skeleton crew,
They ransacked old Port Royal and they took a gold doubloon,
So that they could break the curse and see their skin under the moon.
When Jack had met Will Turner, he knew he was Bootstrap’s son,
So he broke out to guide him, like a drunken Obi-Wan.
Will Turner saved his girlfriend, and they broke the Aztec curse,
And we summarized the whole damn film in just one bleedin’ verse!

Music Fill A (2 measures)
Pintel: Yeah, it got two pegs up!

Chorus 1 (8 measures)
When young Ms. Swann stood by Will’s side, that’s when Norrington knew,
Despite he had the Wedding Date, his Coupling days were through.
The Pearl hit the horizon, and there was no looking back,
If you’ve never seen the movie, then YOU DON’T KNOW JACK!

Music Fill B (4 measures)
Pintel: Don’t bump the mic, I’m bootlegging this song!
Ragetti: Are you going to sell it?
Pintel: Yeah, I’m gonna burn it onto a CD-ARRR!!!

Verse 2 (16 measures)
I frequent the cantinas drinking up between ordeals,
But I dislike when cannibals invite me to their meals.
Aboard the Flying Dutchman after seeing every griever,
I took one look at Davey Jones and said “I’m a believer!”
Meanwhile Will and his leggy lass, became a bride and groom,
Decided he would help him ‘elf, and then he lowered the Bloom.
He took Elizabeth-to-Town, though it may seem unsightly,
Now everyone in Royal knows who does Kiera Knightly!

Chorus 2 (8 measures)
So come on all, and sing a song about our favorite crook,
He’s sure not Finding Neverland, but at least we got a hook.
Go walk the plank and take a Depp, and just ignore his plaque,
If you think that he’s gone Wonka, then YOU DON’T KNOW JACK!

Verse 3 (16 measures)
I met a buxom bar wench whose husband was laid to rest,
So I decided to help myself to that dead man’s chest.
She said, “Back off, you scalawag!”, which was to my dismay,
But soon after I taught to her the meaning of “Parlay”!
Once Pintel and Ragetti looked depressed to my surprise,
They fancied bawdy poppets who had caught their working eyes.
They asked me, “How do you get pleasurable company?”
I just say, “Yo, ho! Yo, ho!” “A PIRATES LIFE FOR ME!” ( EVERYBODY)

Music Fill E (2 measures)
Pintel: I’ve got a FastPass for you, lass!

Chorus 3 (8 measures)
From Orlando to Anaheim, he’ll take you for a ride,
So you just remain seated, keep your hands and arms inside.
Forget the flash photography, and enjoy the attack,
Of a hundred lootin’ robots here THAT ALL KNOW JACK!

Music Fill F (2 measures)
Jack: Why is the rum gone?!
Ragetti: Cause we’re in a Disney park!

Chorus 4 (final chorus) (8 measures)
Port Royal to Tortuga, all the scrumpets he will woo,
A cross between Keith Richards, and that skunk Pepe LePew!
He’s golden on the silver screen while you enjoy a snack,
And if you don’t know the Code, well then YOU DON’T KNOW JACK!
Closing Musical Outro (4 measures)
Ragetti: Forget leverage, I want cleverage!
Jack: Remember, dead men get no tail!
…YOU DON’T KNOW JACK!