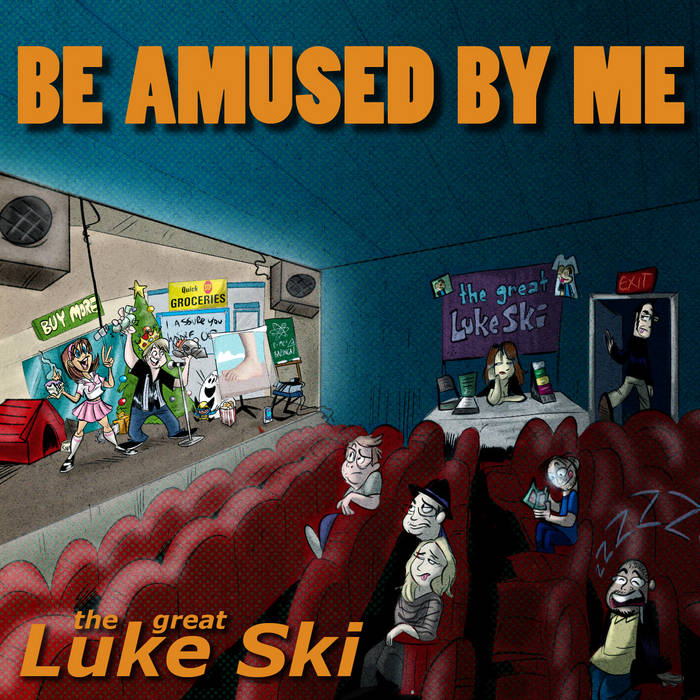 This song, not written in the shed, is an idea that languished in a spiral notebook for years. One of the biggest reasons why being that it is a parody of "MotownPhilly" by Boyz II Men, and the last time I recorded a parody of that group in 1997 the results were a bereft-of-harmony, tone-def-parrot of a track. However, my recent resurrected not-dead-yet song ideas which led to my recent FuMP hits "It's Good To Be The King" and "Snoopy The Dogg" made me think it was about zalling time to enlist a couple of talented friends to join me on this holy quest to find my grail, that being the long overdue Luke Ski parody song tribute to the legendary UK comedy team, "Monty Python's Flying Circus".

This track is from my new album "Be Amused By Me", which was released yesterday at my website LukeSki.com, available as an instant MP3 download, or on CD with instant MP3 download. As well as all of my FuMP tracks from the past 2 years, it also has new songs about "Chuck", the films of Kevin Smith, and "Red Dwarf". So please pick up a copy today, or I'll have to send Dino and Luigi Vercotti over to drop a 16 ton weight on your head.


[Eric Idle: We interrupt this program to annoy you and make things generally irritating.]

[Michael Palin: I, I have a, a silly walk, and I would like to obtain a government grant to help me develop it.]

[John Cleese: I'm not prepared to pursue my line of inquiry any further as is, this is getting too silly.
Graham Chapman: Quite agree, quite agree. Silly is silly is silly. Right, get on with it. Get on with it!]

I'd like to talk to you tonight
About the place of the nude in my bed. (What a giveaway!)
And now a choice a viewing on BBC,
How not to be seen. [*explosion*]
Squashed by cartoon feet. (Pthbth!)
Conrad Poohs and his dancing teeth! (Crelm toothpaste!)
We're all out of cheese, but we got half-a-bees,
Ratbag: And all the berry rat tart you can eat! Eric Idle: Appalling!
Ratbag ladies recreate Pearl Harbor every night.
John Cleese: My hovercraft is full of eels.
John Cleese: My nipples explode with delight!
I'm a super-hero-man
Who needs someone to fix his bike, (Bicycle repair man!)
And if you have ever slept with a lady, (Wink, wink, nudge, nudge,)
Please tell me what it's like! (Say, no, more, SPLUNGE!)

WalkingSilly once again,
Doin' that Monty Python thing.
Bride: Just one mattress would be fine!
[*bucket noise*][Graham Chapman: I'm not coming out!]
Salesmen: What did you say that for? Bride: But it's my only line!

Gavin Millarrrrr: Some people have made the mistake of seeing Luke Ski's work as a load of rubbish filled with pop-culture references. But clever people like me who talk loudly in song parodies see this as ingenious cross-marketing to get nerds to buy his albums.

Announcer: And now the breakdown by the new R&B group, Boyz II Gumby!
[*crashing noises*]
Gumbys: Hello? Shut up! Sorry! Are you the harmony specialist? Hello! My brain hurts! Shut up! It's so hard to say goodbye to yesterday! Sorry! I bang bricks together for the tempo! Ooohh!

Ian MacNaughton:
Now check this out, one day back in London,
Six guys wanted a show.
They come up to me, I said 'Well, what's your name?'
[John Cleese: Monty Python!]
Hey, I don’t know what you're saying.
Then I said, 'Alright fellas, well let me see what you can do.'
So they all put on Viking outfits and said,
'Yo Ian MacNaughton, check this out, see if this one moves you.'

WalkingSilly once again,
Doin' that Monty Python thing.
Aristocrat: I am Brian and so is my wife! Brian: You bastard!
Always look on the bright side of life.

[John Cleese: Right. Who's got a boil on his semprini then?]
[Graham Chapman: What's all this then?]
[Eric Idle: Oh, you're no fun anymore!]
[Cartoon Woman: That'll teach you to be normal!]

Eric Idle: I won’t interrupt this song for a pound.

I didn’t expect the Spanish Inquisition.